Having always been politically independent, a rich and distinctive culture developed in the country over the ages. Perhaps the most important single factor in the molding of Bhutanese character and thought has been the teaching of Lord Buddha, whose eternal truths were first brought into the country from Tibet over the high, snow-bound mountain Passes by the great Indian saint, Guru Padsambhava.

In the Buddhist perspective, culture, tradition and beliefs and the environment are dynamic phenomena that are interwoven tightly in the web of life. As a Buddhist philosopher say, “Culture lies not in objects or monuments but in the mind and compassion towards all sentient beings”.

Bhutan’s unique cultural and traditional values, highly valued in themselves by all the population, are the essential embodiments of the nation’s identity. For a small country located between two most populated countries of the world, India and China, the preservation and promotion of its distinct cultural identity is seen as an important means for its survival as an independent and sovereign Kingdom. It was this identity that has protected and sustained Bhutan and also provided the foundation for its major policies. 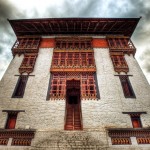 One adorning element Bhutan takes pride in is its architecture. The unique architectural style is conciously preserved by the country and stands out as the main feature on the Bhutanese landscape.

All new structures in Bhutan have to be built within a building code that strives to preserve the features of the traditional look. 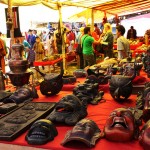 An essential part of Bhutan’s cultural heritage are the thirteen traditional arts and crafts that have been practiced from time immemorial. These arts were formally categorized during the reign of Gyalse Tenzin Rabgay, the fourth temporal ruler of Bhutan. 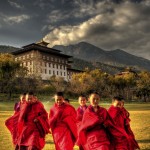 The Kingdom of Bhutan is the only country in the world where Buddhism is the official religion and is endorsed by the government. To ensure the perpetuation of Buddhism, normally, one son from each family attends monastic school. The Buddhist faith plays a fundamental role in the cultural, ethical and sociological development of Bhutan and its people. It permeates all strands of secular life, bringing with it a reverence for the land and its well-being. Annual festivals (Tshechu and Dromchoes) are spiritual occasions in each district and are dedicated to either Guru Rimpoche or other deities.

Mahayana Buddhism was the state religion, and Buddhists comprised about 70% of the population in the early 1990s. 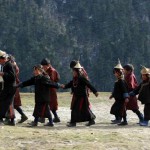 Living in Bhutanese society generally means understanding some accepted norms such as Driglam Namzha, the traditional code of etiquette. Driglam Namzha teaches people a code of conduct to adhere to as members of a respectful society. Examples of Driglam Namzha include wearing a traditional scarf (kabney) when visiting a Dzong or an office, letting the elders and the monks serve themselves first during meals, offering felicitation scarves during ceremonies such as marriages and promotions and politely greeting elders or seniors.