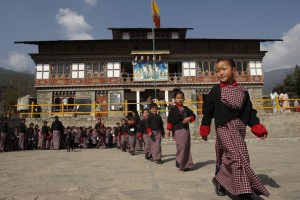 The Kingdom has made great efforts to improve health facilities and provides a free health care to all its citizens. It has achieved a child immunization rate of nearly 100%, iodine deficiency has been eliminated and 50% of the population has access to clean water. Life expectancy has increased from 47.4 years in 1984 to 66 years in 1998. Infant mortality once highest in the world, at 142 per thousand births, had been halved to 70.7 per thousand births by 1998. Until the 1950s, the only education available in Bhutan was from monasteries. While still monastic education continues to play an important role but western style education is expanded and now available throughout the country. Access to basic education has become the inalienable right of all Bhutanese and it is the key to the most of the nation’s ambitions. Literacy has increased from 28% in 1984 to 54% in 1998 and this is further enhanced through adult education programs.